Take your dog on holiday

Holidays can be a problem when you have pets.

Luckily, for smaller animals, Pad, Foot and Paws can help out there with our boarding services.

However, we wouldn’t personally like to leave our dog anywhere for an extended period. He couldn’t cope in kennels, and he is quite fussy about who he feels comfortable with.

Daycare would be fine, or having someone to call round to spend some time with him (we can help with that too), but not for a prolonged period.

That’s why we’ve always tried to take him with us when we go on holiday. This in itself can be difficult as well, though. He’s been camping with us, and been to the odd caravan, and also to a few cottages that we’ve hired – you can find a great list of dog friendly cottages and accommodation at The Good Dog Guide.

There’s one place that does stick in my mind though. A dog friendly hotel. A hotel that got slated on the “Four In a Bed” series for allowing dogs into their restaurant. Now why would that be a problem? 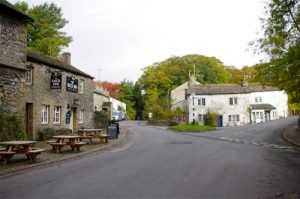 The approach to Beck Hall in Malham, Yorkshire, is unbelievably picturesque. Driving through Malham village stirred up images of Dibley or other similarly idyllic TV locations. Following the river out of the village takes you to the Beck Hall car park, from which you walk over an ancient clapper bridge to the impressive olde worlde hotel.

The staff were both professional and welcoming, and walked us round to our room. This was not actually within the hotel though, which wasn’t a problem for us. We were taken round past the stream to an external door which opened into what could best be described as a lodge with wood panelled walls and a window overlooking the river. 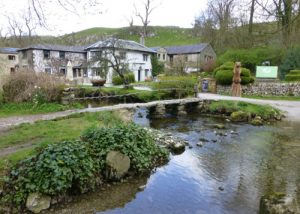 After unpacking and exploring, we headed into the hotel for food. The restaurant was lovely, and doggo spent his time eyeing up an golden retriever at the other side of the room. The food was excellent – no microwaving here, just good quality, freshly cooked meals. We shared some pork ribs – I ate the meat, and doggo had the bones. There are even free dog treats to keep them happy while you eat.

We then retired to the “snug”, a seriously cosy room with leather wing back chairs and chesterfields and an open fire.

A short walk around the village and then back to the room. With all the excitement, doggo was out like a light.

The breakfast the next morning was just what we needed for the trek we had ahead. All good quality local produce and freshly cooked.

There are guides at the hotel for walks in the area. We opted for the second to longest one, which would take us a good few hours.

Firstly, the walk took us to Malham Cove, which is impressive enough from the bottom. However, after almost having a coronary while climbing the steps up the side, the view from the top is incredible. 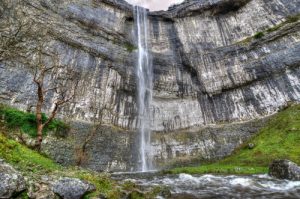 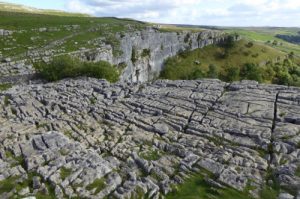 You will probably recognise the bizarre rock formations from a Harry Potter film – they camped there in Deathly Hallows part 1. 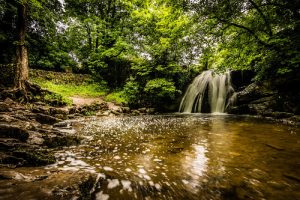 Once we had recovered, we carried on towards Janet’s Foss, apparently where the “queen of the fairies” lives. Looking at the waterfall and pool, that would be quite easy to believe. The pool was traditionally used for sheep dipping, an event which took on a carnival air and drew the village inhabitants for the social occasion. No sheep now there now though, quite fortunately.

After a paddle in the pool and river (doggo, not the humans), off through the woods, walking alongside the river. The ground at the side of the path was completely covered in wild garlic flowers, and the smell was incredible (if you like the smell of garlic). 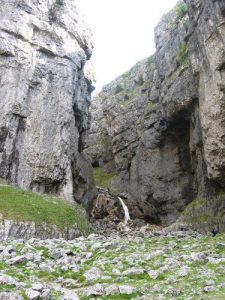 We were then heading towards Gordale Scar. There is a path that takes you off the road (hardly a road, to be honest) and into a huge limestone ravine. The river runs along this, and as you get to the end of the ravine, two waterfalls cascade down the 100 metre high cliffs.

We got back to the hotel around 5 hours later and ready for refreshment. There are a couple of pubs in the village, both dog friendly, and both serving food. We had to test both of them, but we settled for the one with the log burner and the best beer.

In conclusion, Beck Hall is a fantastic hotel if you want to go away with a dog. Saying that though, we would very happily stay there without. The village of Malham is beautiful, and there are as many walks as you can handle. Highly recommended for a few days away from the rat race.

It is with sadness and regret that following the prime minister’s announcement this evening, we now feel that the responsible thing to do is to suspend all of Pad, Foot & Paws services for the next three […]

It’s the end of the summer holidays. Many of us grown-ups are now rejoicing at the fact that the kids are going back to school. On the other hand, you might be dreading the fact […]

This website uses cookies to improve your experience while you navigate through the website. Out of these, the cookies that are categorized as necessary are stored on your browser as they are essential for the working of basic functionalities of the website. We also use third-party cookies that help us analyze and understand how you use this website. These cookies will be stored in your browser only with your consent. You also have the option to opt-out of these cookies. But opting out of some of these cookies may affect your browsing experience.
Necessary Always Enabled
Necessary cookies are absolutely essential for the website to function properly. These cookies ensure basic functionalities and security features of the website, anonymously.
Functional
Functional cookies help to perform certain functionalities like sharing the content of the website on social media platforms, collect feedbacks, and other third-party features.
Performance
Performance cookies are used to understand and analyze the key performance indexes of the website which helps in delivering a better user experience for the visitors.
Analytics
Analytical cookies are used to understand how visitors interact with the website. These cookies help provide information on metrics the number of visitors, bounce rate, traffic source, etc.
Advertisement
Advertisement cookies are used to provide visitors with relevant ads and marketing campaigns. These cookies track visitors across websites and collect information to provide customized ads.
Others
Other uncategorized cookies are those that are being analyzed and have not been classified into a category as yet.
SAVE & ACCEPT